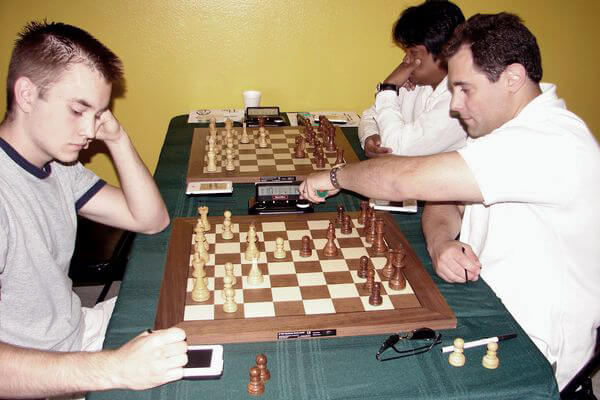 The Monroi system was used by all the players in the competition, so avid chess fans everywhere could follow the real time broadcast on the World Databank of Chess. Congratulations to all the participants and thanks to the USCF, in particular international arbiter Carol Jarecki and tournament director Charles Hatherill. We look forward to seeing everyone again next year!

No sooner had that event concluded then the Las Vegas International Chess Festival, from June 15- June 19, got underway at the Riviera Hotel and Casino. This open event offered players at every level the opportunity to compete for attractive prizes in many sections. The top section resulted in a five way tie between GM Aleks Wojtkiewicz, out of Maryland, GM Varazhan Akobian from California, GM Nikola Mitkov, who now lives in Illinois, and foreign GM’s Merab Gagunashvili of Georgia and GM Lubomir Ftacnik of Slovakia. One of the most popular attractions of the event were the simultaneous exhibitions by GM Walter Browne and WGM Susan Polgar. The six time U.S.champion faced 23 opponents and surrendered only 3 draws, to Peter Grieve, Robert Hatfield, and Peter Green. Ms. Polgar took on 33 adversaries at the same time and lost only one game to Allan Crow. Four players, Jeffery Gallegos, Rory Valle, Daniel Schmidt and Charles Davismanaged to draw. The Monroi system was used to record and broadcast all the games.