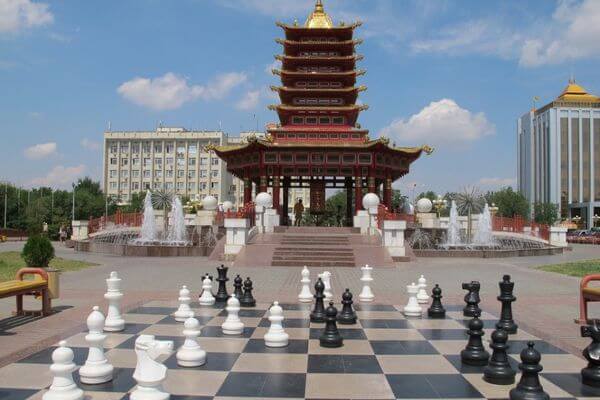 When it was her turn to speak, Brana  began by expressing her gratitude to FIDE members for the opportunity to visit Elista. She described Elista as a unique chess venue and thanked the Kalmyk people for their warm hospitality. Ms. Giancristofaro then began her presentation of the new Electronic Chess Assistant, designed to speed up and modify the process of writing down the chess moves during the game. “As you know, in a typical chess tournament we use paper scoresheets. The tournament organizer must collect all those sheets after every round and manually enter the scores in electronic format. Sometimes it takes until midnight, and often it is hard to understand the handwriting. After that they still have to publish a bulletin. When I played chess, I used to lose some of my paper scoresheets, or as a result of being excited during the game I scribbled unreadable chess scores. This happens to many chess players. Therefore we created an Electronic Chess Assistant, a new system for secure chess game recording and viewing, which uses universal pictorial symbol chess notation. It is portable and very easy to use. ”In the recording mode, the Electronic Chess Assistant cannot access the database, and can only record the chess moves. In the viewing mode, the operator can select games for review and analysis.It has wireless capabilities, and no additional setup is required. The Electronic Chess Assistant does not change any chess rules. It is like a regular scoresheet, but instead of paper it's electronic. Chess players will have an opportunity to receive information about the next round opponent as soon as the previous round is completed, and what is most important, they will be able to download the opponent's games in that tournament, in order to prepare better for the next game. A single computer can manage an unlimited number of games.

Mr. Campomanes added that many top chess players who had been consulted during the development of the system “fell in love with it.” At the same time the MonRoi system is so simple to operate that children who have tested the product found it easy to use. When asked about the price of an Electronic Chess Assistant, Ms. Giancristofaro told journalists that it would be no more expensive than a mobile phone. In conclusion she said: “The MonRoi system does not recognize borders, it really unifies the chess world.”