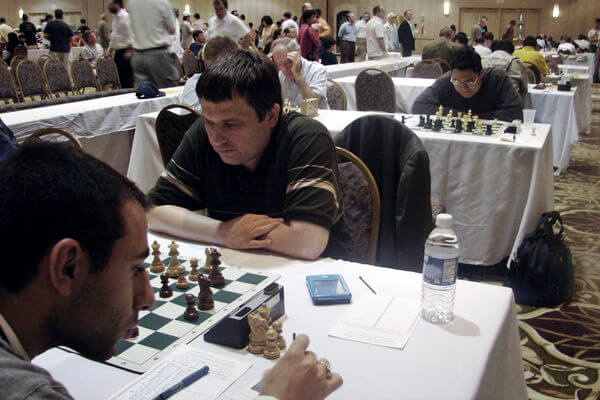 Philadelphia, USA
The 34thAnnual World Open was held at the Sheraton Philadelphia City Center Hotel, in Philadelphia, Pennslyvania from June 28th to July 4th, 2006. Despite heavy rainfall in the area, around 1500 players in total came to this year’s World Open.

The open section attracted 237 players, including 46 GM’s, 26 IM’s, and 5 WGM’s (all of the WGM’s from India !). When the smoke had cleared there was a nine way tie for first place between GM’s Gata Kamsky, Ildar Ibragimov, Jaan Ehlvest, Vadim Milov, Leonid Yudasin, Alexander Ivanov, G. Kacheishvili, Aleks Wojtkiewicz and Joel Benjamin.They all collected approximately $6000 for 7/9.

Fifty PCM’s were available to players in the Open Section. For the first two rounds the devices were offered only to those players who had used them before. After that there was a waiting list because so many competitors were keen to try it out. Grandmaster Hikaru Nakamura used the electronic scoresheet with ease, and the players who did get a chance to enter their moves on the innovative PCMs were delighted with the sharp looking paper printout they received from the central server, including the time used for each move. Over the course of the tournament MonRoi broadcast 250 games in real time. We were happy to be part of another successful World Open. Thanks to the tournament organizer Bill Goichberg, Chief Arbiter Carol Jarecki and the entire team of organizers. Susan Grumer, journalist said: “In my opinion you have a wonderful product and it certainly enhanced the enjoyment of the World Open for the many chess players around the world who could not be here in person.” We are already looking forward to the 2007 World Open.