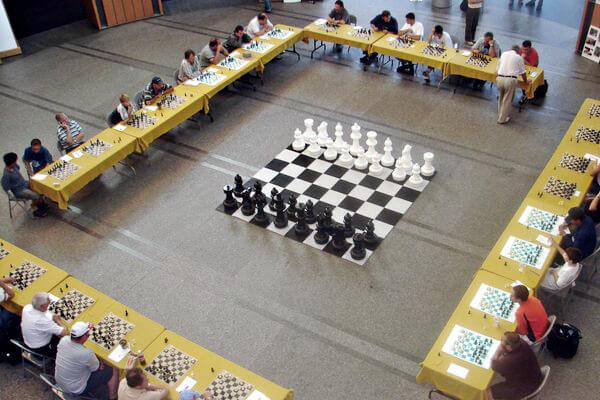 In addition to the three major tournaments there were club displays, simultaneous exhibitions, blitz tournaments, bug house competitions, commentaries, live human chess games and the CFC Annual General Meeting. A great deal of credit must go to organizers Hal Bond and Patrick McDonald for putting together such an amazing chess extravaganza. The city of Kitchener emerged as a star over the course of the festival, too. It’s a safe, clean place with many tourist attractions and a number of excellent cafes and pubs which are open late. A highlight of the festival was a colorful and dynamic live chess demonstration presented by the local Society of Creative Anachronism. Knights in full armor jousted in the Civic Square , reinterpreting the chess struggle while beautiful damsels in flowing costume looked on, along with many rapt spectators. “Cruise Night,” a city sponsored parade of vintage cars took place the same day and there was a rock’n’roll tribute also, complete with an Elvis Presley look alike contest. Two simultaneous exhibitions given by FIDE trainer Roman Pelts, who went undefeated, and east coast Master Robert Hamilton were both very popular with young players and parents alike. With all the excitement surrounding the chess tournaments themselves, it’s amazing that the players were able to concentrate on their moves, but they did, and produced fighting chess at every level. The Canadian Open attracted over 200 players for a nine round Swiss System, in three sections. GM WalterArencibia of Cuba and Indian GM Abhijit Kunte tied for first with seven points. Both players went undefeated and Arencibia defeated Russian GM Evgeny Bareev(2683!) in round six. John Upperwon the Under 2000 section with 8 points and young Alexandra Botez  took the Under 1600 section with a score of 7 ½ . British Columbian Bindi Cheng won the seven game round-robin Canadian Junior Championship with six wins and one draw. The Under 18 Boys title went to David Wang of Ontario, while Raja Panjwani from Ontario won the Under 16 Boys title. The Under 16 and Under 14 Girls was combined into one round-robin section of eight players. Ontarians Gabrielle Nadeau, Under 16 and Sonja Xiong, Under 14 came out on top. Talented Shiyam Thavandiran of Ontario took the Boys Under 14 honors while Arthur Calugar headed the field in the Under 12 Boys. Myriam Roy of Quebec cruised to victory in Under 12 Girls. Under 10 Boys went to Richard Leu, while Steven Leu garnered the Under 8 Boys laurels. Regina-Veronicka Kalaydina was the Under 10 Girls champion. The MonRoi system was implemented again on selected boards in all of the tournaments with superlative results. Indeed, with only a certain number of the Personal Chess Managers available, there was a waiting list to use the new electronic scoresheet technology. Once more parents of young players were especially delighted with MonRoi. They were able to watch the games in progress from a nearby skittles room equipped with a projector and big screen. The 2006 Kitchener Chess Festival was an unqualified success and MonRoi was thrilled to be part of it all. Hal Bond said: “MonRoi Rocks! It is wonderful technology- players loved using it and the spectators enjoyed watching the games.”