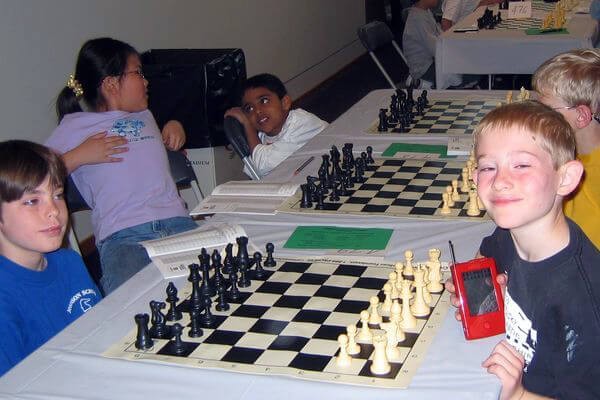 The opening ceremony included an exciting blindfold match between Grandmaster Maurice Ashley, the first and only African-American to achieve the title, and Grandmaster Gregory Kaidanov, the third highest rated player in the United States. The evening also featured a series of simultaneous exhibitions by local masters Russell Wilson, Christopher Dorr, Sergey Berchenko, Hans Multhopp and 16 year old International Master Giorgi Margvelashvili. There was even a performance from the Cincinnati Musical Theatre’s upcoming production of “Chess.”  MonRoi Personal Chess Manager proved once again to be very popular with players. Rodney Vaughn said: “My daughter loved it. Absolute beginners can take notation and the game is easily available for analysis after it is over.” Grant Perks reported that “It took less time to record the moves on the new electronic scoresheet than to write them on paper.” David Gilchrist, one of the parents sang its praises. “My son used it. I watched his games live on the Internet as he played them. It was great!” Congratulations to all the winners and kudos to the organizers and sponsors of this fine event, in particular the non-profit Chris Collinsworth ProScan Foundation.