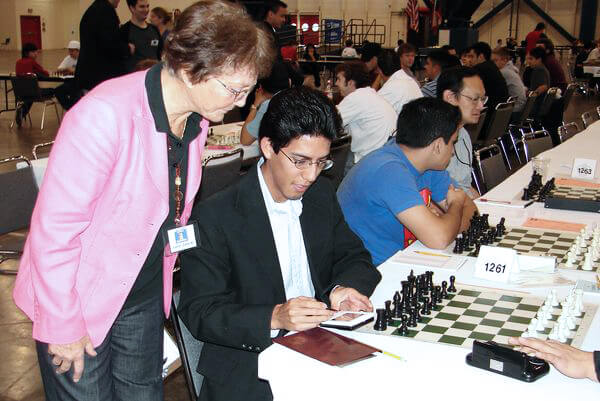 Texas, USA
MonRoi would like to congratulate all the winners and participants in the National Collegiate USCF Championship held in Texas , from December 2-4, 2005.  This important tournament attracted 1,575 young players to an excellent venue at the Houston Hilton.  The MonRoi team would like to salute the United States Chess Federation Bill Hall, Jerry Nash, National Events Coordinator Diane Reese, as well as Chief Tournament Director Robert Tanner on a highly successful event.

“Scholastic chess in general provides the chance to see new places, meet new people, and fill your life with new experiences,” said Mr. Hall, United States Chess Federation (USCF) Executive Director. The USCF has new offices inCrossville , Tennessee , where a dedicated and enthusiastic team works diligently to promote the educational value of chess in schools. “Developing scholastic chess to its full potential will require our best ideas and efforts. Our collective voice really can make a difference.” added Mr. Nash, USCF Scholastic and FIDE Director. It is estimated that there are 30 million children who play chess in America . This number is growing rapidly.

The MonRoi electronic scoresheet was demonstrated and tested successfully once again at this popular USCF event.  The company booth generated a great deal of interest, after which it was decided that the system would be used in the last round of the collegiate tournament, on two boards. The players who requested to use this innovative device were given 5-minute coaching sessions and then used the Personal Chess Manager effectively. Aaron Reyes from Texas said, “I like to try new things. MonRoi is lot faster than paper notation. I enjoyed using it. It is going to be awesome to watch tournaments in real-time. It will be great for United States chess.” Fellow Texan Steven Watson tried it and said, “It’s a neat idea to see the games over the Internet, and not to have to keep track of scorebooks anymore.”  Interestingly, both of these players won their games. Parents were particularly excited about the possibility of following their kids’ games in real time on the net. Many thanks to long time International Arbiter Carol Jarecki, who handled the system implementation. It was noted that the Internet media access to tournaments in progress will significantly foster the popularity of chess.