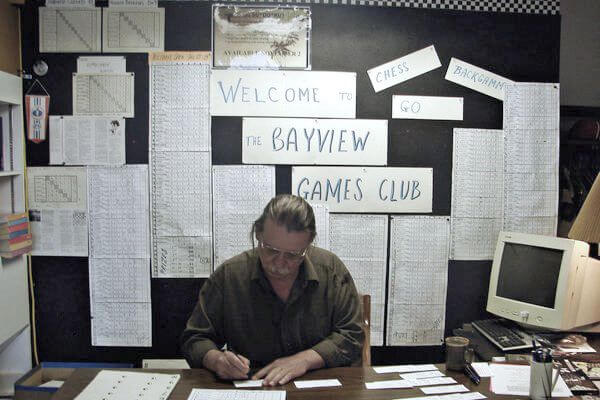 Toronto, Canada
During our stay in Toronto the MonRoi team had a chance to visit the Bayview Games Club at 1681 Bayview Avenue, two blocks south of Eglington. This is a large comfortable place to play chess seven days a week, in the old fashioned tradition of big city chess clubs.

There is a snack bar serving hearty sandwiches, treats and beverages and a bulletin board so everyone can keep abreast of coming events. Right now, and for the next three months, Sundays are reserved for the Toronto Closed Championship. Wednesdays offer the ever popular 15 minute tournaments and Saturdays are the famous speed tournaments that attract everybody, including some grandmasters! The owner of this establishment is none other than Vladimir Dobrich, a colorful figure and strong master who has been a fixture on the Canadian chess scene since 1963.  Vladimir started playing chess in Toronto at the old Central YMCA club and went on to found Chess Canada magazine and enterprises. He also played in two prestigious Canadian Closed Championships. But Vlad’s knowledge and skill is not confined to chess, which you can surmise from the business card he politely hands you. It says Vlad Dobrich and underneath, Master of Ancient Games. So he is an expert at backgammon and Go as well, and these games are in evidence at his club, too.  The Bayview Games Club has been open for about one year now, and Mr. Dobrich is always thinking of ways to meet chess players’ needs. The club offers ladder tournaments so that intermediate players can test their skills against opponents of similar strength, and round robin events for stronger competitors. There is master analysis readily available from the owner, who is on call anytime at 416-722-9709.  Better still, drop by and say hello!