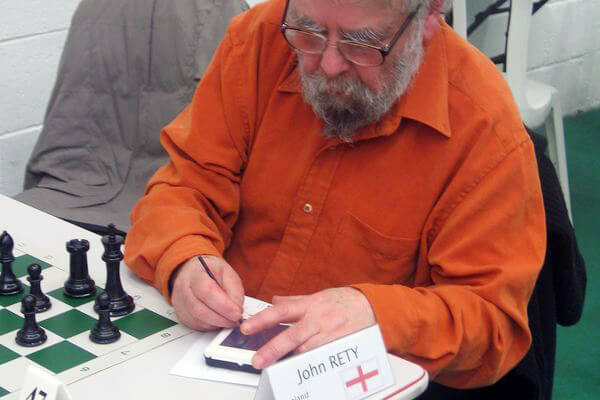 Hastings, England
The United Kingdom is the Birthplace of Newton, Darwin, Shakespeare and the Beatles. It is the home of the world’s largest foreign exchange market. It is known that English people consume more tea per capita then anybody else in the world.Hastings is a small town with a strong community spirit, and with a popular meeting place called The Pig in Paradise.

This year’s Congress was full of surprises.  No MonRoi training was organized for players due to a Christmas snow storm.  Pairings changed after the round started, as players were still arriving covered in snow!  Jean Pierre Leroux had injured his fingers, but the First Aid MonRoi team brought him help. By providing the MonRoi device, JP was able to record his moves!  Also, our dear friend Stewart Reuben, FIDE Chairman of Organizer Committee, caught the hi-tech bug and adorned himself in a MonRoi flag, an excellent choice for clothing.

Stewart Reuben stated: "The MonRoi equipment fulfilled its function admirably and caused no problems. None of the units failed. Some of the players are breaking the Laws of Chess by not supplying a legible scoresheet. It only occurs to me that we could have insisted on such players using the Personal Chess Managers. I acted as a filler in four games in Hastings and scored 2.5/4. If the PCM affected my result, it could only have been to improve it. The rate of play used is very user-friendly for this equipment. It was 40 moves in 80 minutes, all the moves in 20 minutes, adding on one minute for every move from the first. I would have no hesitation in using the equipment again."

At the Congress, MonRoi used an LCD projector, which connected to the World Databank of Chess, for real-time game broadcasting. It produces immediate visible results. This real-time transmission attracted a lot of media, such as TV stations and major paper columns.   Moreover, the MonRoi table earned itself a focal and respected position.  Here players and arbiters met us to ask questions about the PGN files and results.

By the end of the tournament 70 % of Boards were running Chess Managers. We would like to recognize John Rety for sharing his enthusiasm about the devices which he used diligently in every round.

MonRoi Inc. is a company that developed a hand-held wireless tournament management system.  FIDE certified it in February 2005 in Tbilisi, Georgia. Garry Kasparov endorsed it! The system was invented and patented 3 years ago by Brana Malobabic-Giancristofaro, an engineer, business owner and chess fan. Her background is from Nortel Networks, which comes as no surprise, since this groundbreaking technology is built on a unique proprietary hardware and software platform. MonRoi is also proud to have Susan Polgar as our spokesperson.

Yes, you can use the Personal Chess Manager (PCM) instead of a pen and paper in any tournament. Even if the tournament organizer does not use the Tournament Manager, you have the right to record your games in an electronic format on the PCM. It is tamper-free and fully secure. And FIDE Certified. MonRoi Chess Manager can record, wirelessly transmit, review databank of chess games, view games in real-time and has SD card capabilities (for training modules, game analysis, chess engine and other hot stuff). The price of a PCM is 299 EURO.